Behind the Scenes: Sports Graphics for the Minnesota Vikings New Home

If you live in the Twin Cities of Minneapolis and St. Paul, you’ve likely heard plenty about the sparkling new U.S. Bank Stadium. The venue is more than twice the size of its predecessor (The Metrodome) and stands nearly 30 stories tall at its highest point. The $1 Billion stadium, which officially opened on July 22, 2016, is the official home of the Minnesota Vikings.

Just weeks prior to the stadium’s grand opening, however, many of the finishing touches had yet to be completed. Sports and the Arts (a customer of The Vomela Companies) was charged with the task of outfitting the Vikings’ facility with graphics that were as cutting-edge as the facility itself. They approached us about producing approximately 9,000 square feet of graphics ranging from elevator graphics to backlit signage to wall murals. We won the opportunity, despite it being a competitive situation. Our local presence gave us an advantage—we were wholly available to them throughout the project, providing consistent on-site project management.

The Vomela Companies account directors met with representatives from Sports and the Arts nearly every morning to review files and plans. This was especially important as art came in sporadically throughout the process. A tight timeline meant that clear communication around due dates and deadlines was essential. It was critical that our prepress, printing and finishing departments worked closely, and at the end of the day, all deadlines were met and the project was a success. 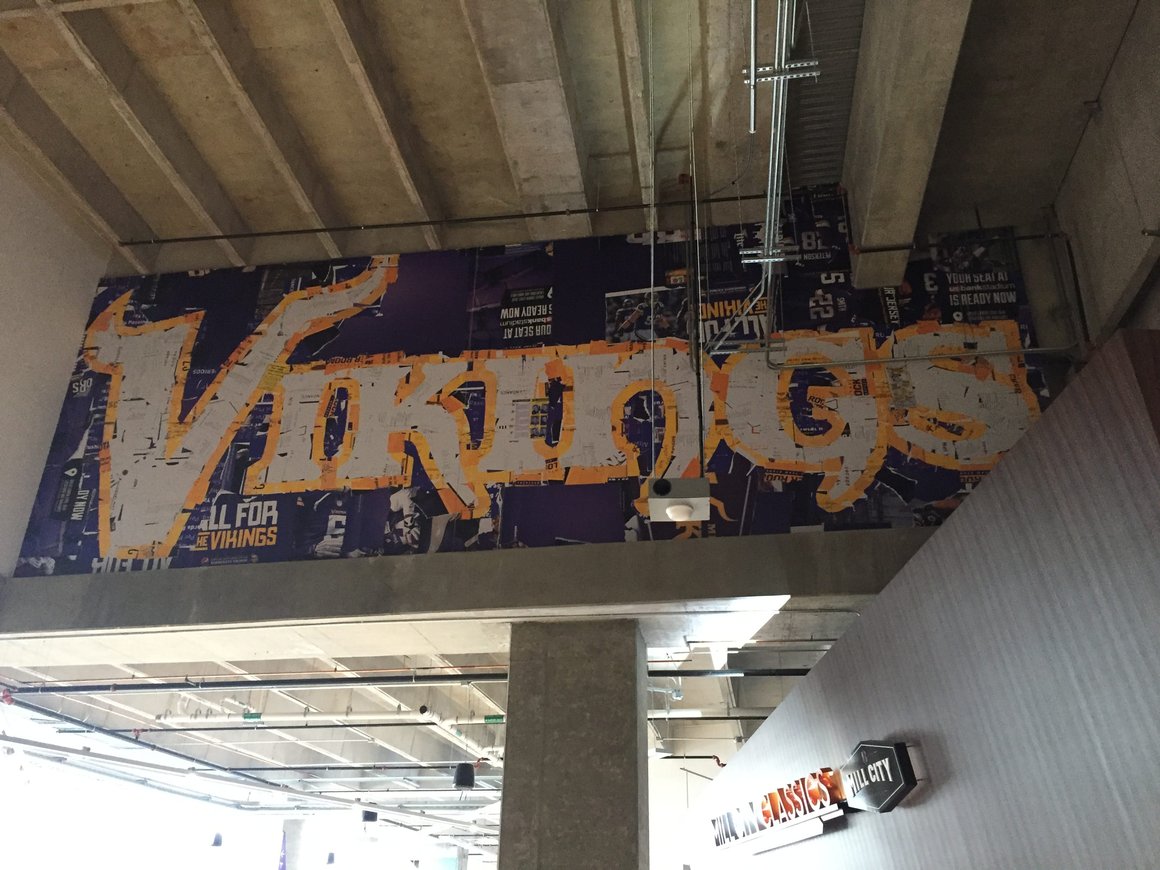 To gain some perspective, this mural is 274 inches long by 113 inches high. 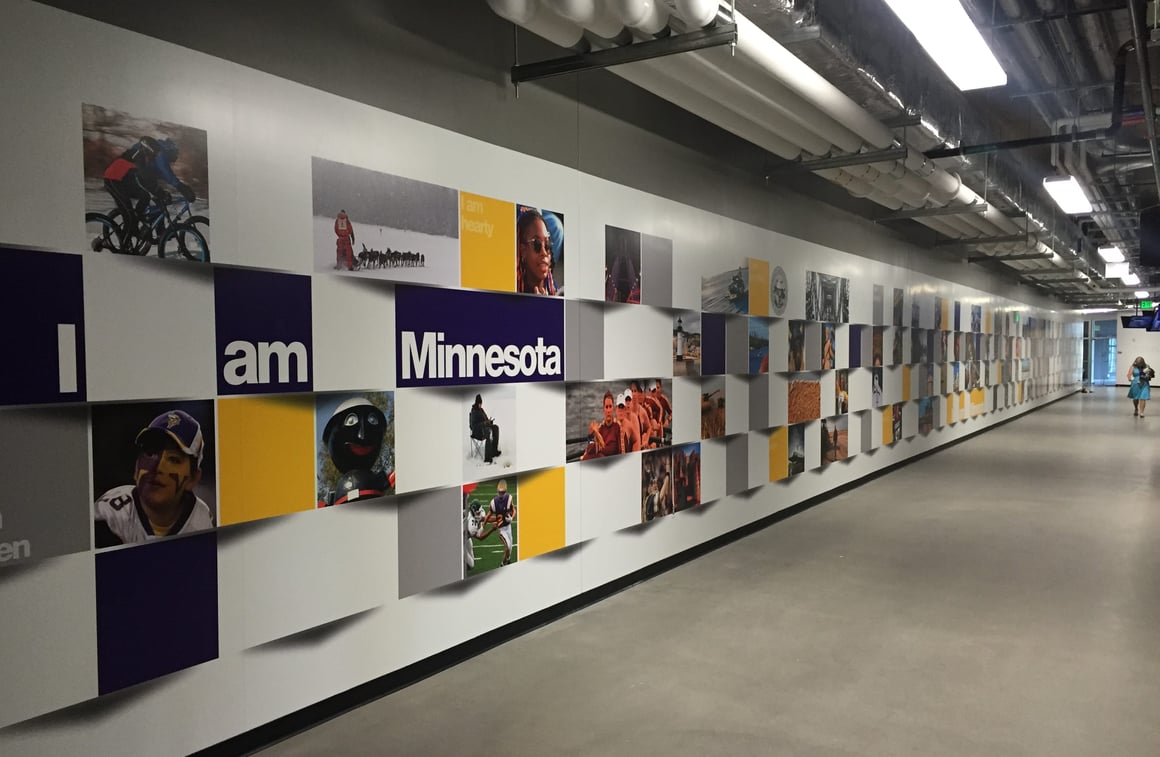 Although this 145-foot long mural looks 3D, it’s actually a flat wall mural. You can see the application process below. 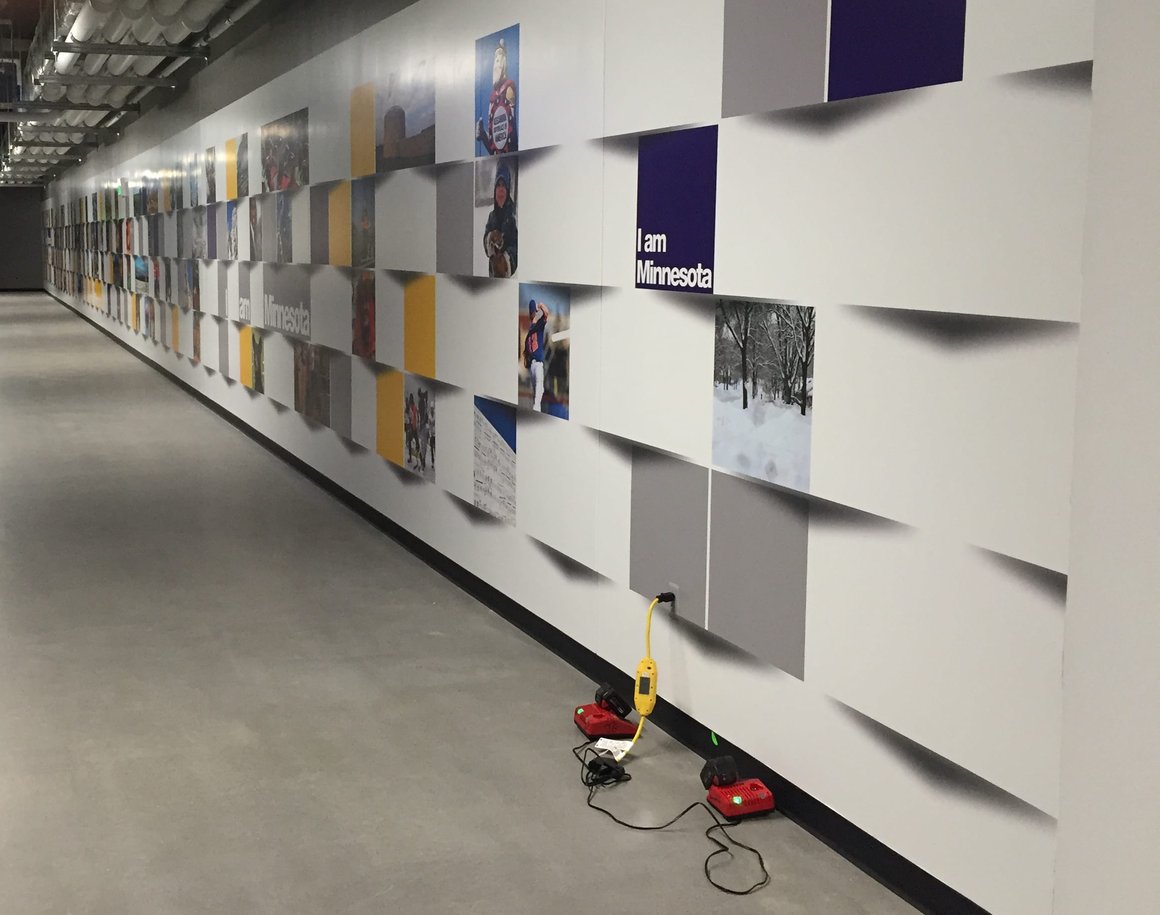 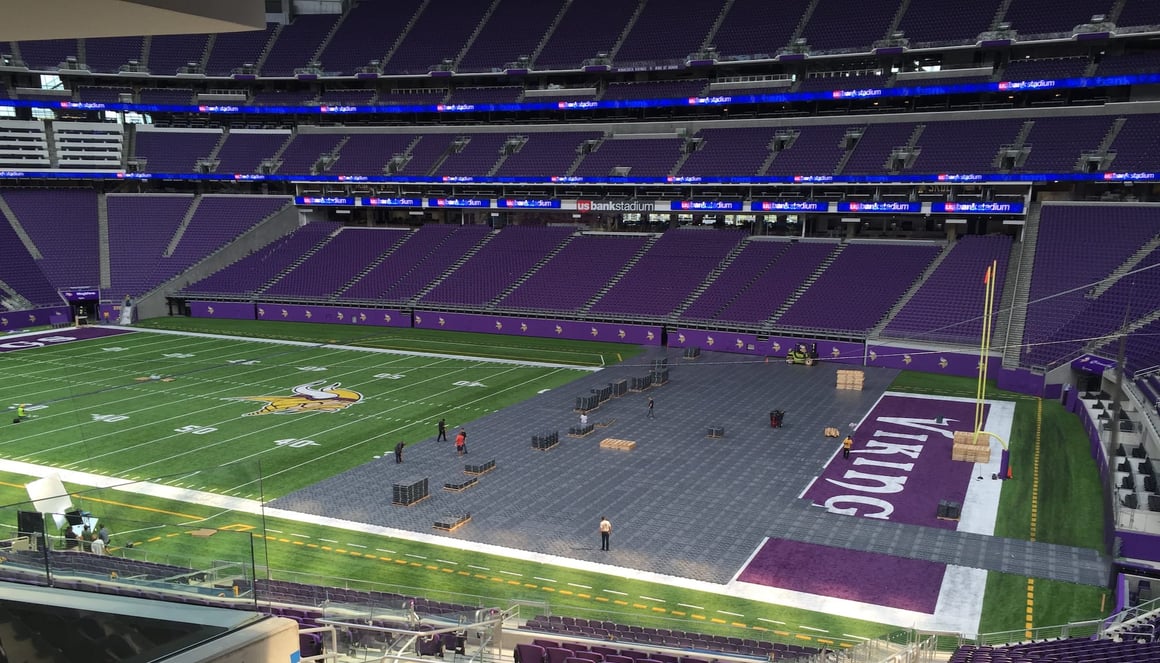 A highlight of the Vikings graphics project was “having” to go on-site for reviews before the stadium was complete.

Vivid graphics and banners helped the Minnesota Vikings with their sales efforts for the new stadium.

Prior to our work at U.S. Bank Stadium, The Vomela Companies assisted the Minnesota Vikings in the creation of a marketing center located across the street from the construction site. The marketing center sells suites and season tickets to the public and also served to educate people about stadium plans and progress. We helped the franchise deck out the marketing center with a variety of graphics, murals and timelines, as well as supplied artwork for the stadium’s 131 premium suites.

We produced over 100 canvas wraps for the stadium suites, many of which were larger than we had previously ever created, challenging us to provide creative solutions to production and installation of the wraps.