In the wake of Super Bowl 54, we’ve just experienced one of the nation’s most prolific annual sporting events. Beyond being a championship football game, the Super Bowl represents an immense display of production, competition, and creativity. Countless people in countless industries work together to transform it into the spectacle it has become over the years, and The Vomela Companies are proud to be a part of that.

For being such a massive event, preparation for a Super Bowl can be surprisingly last minute. With only 14 days between the final game of the playoffs and the event itself, printers are tasked with creating complex brand identities in the short time after finding out which teams have advanced to football’s biggest game. The result is a chaotic (but exciting) journey to kickoff.

This year, Vomela affiliates across the country came together to create unique graphics for the pre-event parties on both sides of ball. Our C2 Imaging division in New Jersey secured the projects, and they turned to our large format experts at Fusion Imaging to make sure Chiefs and 49ers fans had a fun and memorable environment to celebrate in preparation for their big day. We also transformed a variety of surfaces for TicketMaster, the official ticketing vendor of the Super Bowl.

With only 14 days to prepare for the event, much of that time is spent concepting and preparing the final art. This year, it took until the Monday before the game to finalize print-ready files, giving the production team just two days to produce all team-specific branding before the shipping deadline. Our installation team was able to complete all the work just before midnight on Saturday, leaving the event spaces in Miami a completely new experience for Super Bowl Sunday.

This sort of last-minute magic isn’t out of the ordinary for The Vomela Companies. We’ve been in the major event space for decades, having worked on Super Bowls, Olympics, and everything in between. When Super Bowl 52 brought the event close to our corporate headquarters in St. Paul, MN, we partnered with the Super Bowl Host Committee to transform the Twin Cities into the Bold North for one frigid weekend. Even in the cold, spaces around the city were transformed into memorable experiences. 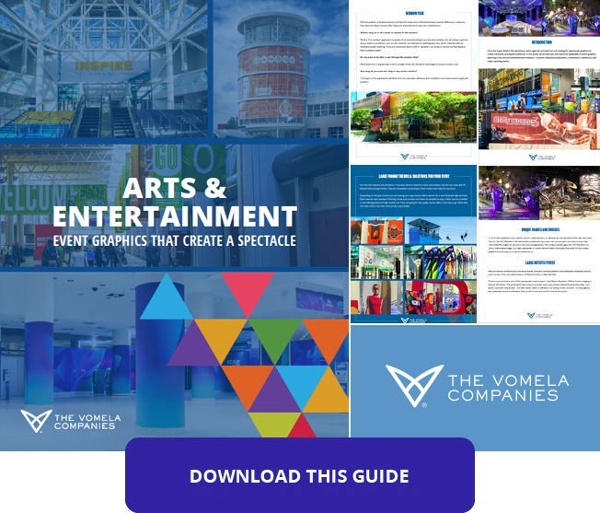 Using Print Graphics for Social Distancing in Entertainment Spaces
How to Transform Large Spaces for Recurring Events
What Happens After the Big Event?