Vomela and the Changing Role of Women in Printing

Claire Richards is an expert on women in printing. After all, she is one. "I've been in the printing industry for 12 years, and I grew up with industry knowledge because my dad has worked for a screen printer for a long time," she says. Richards is part of a growing statistic; women now make up 35% of Vomela's workforce across all its divisions.

Despite there being women in printing since the 1500s, the industrial workforce has traditionally been almost entirely male. However, statistics from the 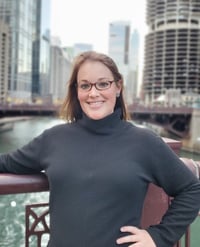 U.S. Department of Commerce show that women are slowly becoming more prevalent in manufacturing fields. Women now make up about 30% of the 15.8 million people employed in manufacturing industries. But just as in many fields, only 1 in 4 manufacturing leaders are women.

The number of women in manufacturing is likely rising in part due to the increasingly high-tech nature of these fields. The printing industry especially has become more and more high-tech over the years. Companies are finding this as an opportunity to elevate their businesses by recruiting more women, who on average earn more degrees than men. Diversity—including gender diversity—has been proven to encourage innovation and bolster companies' bottom lines. As manufacturing fields continue to evolve, women bring new perspectives to traditional fields.

Industrial companies also provide more jobs than just those running the machines on the shop floor. Women are making a difference in accounting and finance, IT, account management, marketing, human resources, and other related positions.

As an account executive in Vomela's Transportation Division, Richards has a background in marketing and branding. But she applauds the women who are working in more male-dominant areas of the company. "It's exciting to see women's involvement on the manufacturing floor running machines, mixing inks, and packing shipments!"

To further the strength of its female workforce, the Transportation Division has recently joined the Women in Trucking Association. The division is excited to aid in Women in Trucking's mission to bring gender diversity to transportation. Richards and her colleagues are exploring what participation in the organization looks like for Vomela. Representatives from Vomela are making plans to attend the association's national conference in November, where they look forward to networking with other women in the transportation industry.

Women in industrial and manufacturing fields face some unique challenges, but also reap great benefits. Richards acknowledges the challenges but focuses on the resilience and problem-solving skills built as a result. "There have been challenges from time to time as the only female in the room. But I have learned to come into conversations and projects with a confidence and enthusiasm that I like to think is appreciated and respected."

Richards also cites role models within Vomela who are examples of confident and respected colleagues. Specifically, she calls out Marilee Clark, Vomela's Vice President of Sales Learning and Development, who "brings a spunk to her group but also to the sales teams across all divisions." Richards also looks to Rachel Webb, the project management lead at the Transportation Division, as someone to watch.

Richards' overall experience as a part of the Vomela family has been a positive one. "I have felt very supported as a woman at Vomela when it comes to our culture and work environment," she shares. "I am excited to see the growth of our company and women in various leadership roles."